The article "Two Methodologies for the Interpretation of Abstract Expressionism" by Franic V. O'Connor, 1988, has a section called "The Psychodynamically Considered Creator".

Or translated, what kind of an artist are you? He writes "An artist can be understood, specifically, as a person fixated at the visual stage of early development..." Essentially, artists have a partly unconscious NEED to make things. The need to make things is "manifested in various cultural contexts." He creates a fascinating list of various kinds of artists.

Is it worth figuring out where ones work comes from? What happens if your work crossed into more than one category? What about other categories he didn't list? Are these categories valid?

Robert Henry is my new mentor for this semester. I met with him last Saturday at his studio in Wellfleet on Cape Cod. He introduced me to his wife, Selina Trieff. Selina is currently exhibiting in a group show in Fairfield, CT. Bob has a second student he is mentoring along with myself.

I brought up my work to his large studio overlooking the quiet bay. He was very generous with his time and spot on, in his critique of my work. His suggestions were that I focus on:
Video about Henry and Trieff:
Their Lives in Art: Robert Henry and Selina Trieff, a one-hour documentary, is the story of the life and work of two painters whose nearly 50 years of married life has been devoted to the making of art.
Posted by Rebecca Moran at 11:50 PM No comments:

“My name’s not here, there’s been a mistake! How could this be?” These thoughts made me anxiously search the 600 Beacon Street building, in semi-darkness the evening before my third residency. I was desperate to find my critique space.

Physical exhibition space is important. The critique space would designate where I spent my time for ten days and with whom. I wanted to think about the space and plan out how to display the work as I find it challenging to curate my own work. I was apprehensive about hanging and exhibiting scrolls, oil paintings and digital prints. After searching all the floors four more times, I never did find my name. I was so sure a mistake had been made; I grabbed a sheet of paper and lettered my name on it, serifs and all and attached it to an open blank wall.

Officially, the January 2008 residency began the next morning. I was sitting with members of Group Three perusing the residency schedule when someone exclaimed, “Hey, look, you’re in the basement!” “My God,” I thought, “The basement? There’s my name!” It never even occurred to me to look down there. Appalled, and at the same time relieved, I hurried over to 600 Beacon Street and tore my name down from someone else’s space. Chagrined and uneasy, I dragged my portfolio down to lowest recesses of the 600 Beacon Street building. Residencies are such an emotional roller coaster ride.

There were three other disappointed and upset students in that space, in addition to myself. It was dark, dirty, and windowless. A harsh cold fluorescent light when turned off left the four of us in complete darkness. The worst part was we were isolated from the rest of the other students. We made a group decision to make this space work. We voiced our objections to the space and suggested possible solutions. We threw ourselves into making that space work. I felt grateful to be part of this fantastic critique group.
Long Reflections: read more

Posted by Rebecca Moran at 12:25 AM No comments:

Painting the landscape acts as a reference point and provides visual freedom to create new space. New space serves as a metaphor for personal experience and allows for the exploration of the divinity in nature. Imagery is informed by Romanticism and encompass transcendental abstraction. Digital prints, oil paintings and ink brush paintings are three distinct and related bodies of work I created the past six months.

Large Format Digital Prints: The Wreck of Ah Tar
By viewing mythology as a rich source of image making, I created a series of digital prints using a two-dimensional symmetrical glyph composed of twelve equilateral triangles. This form was built three dimensionally out of balsa wood and arranged in still life compositions. The still lifes were digitally photographed and altered. 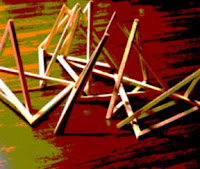 24"x36" Digital Print
The architectural forms were wrecked, destroyed and damaged. This symbolizes the ‘wrecking’ of the feminine principle, environmental and holistic processes. These images originate from the dualism of creation and destruction. They express levels of intensity in the experience of destruction.

The autumn trees and broken light of the deep woods visually influence me. Living in a New England woodland environment, images of densely woodland areas came out in the painting. Stylistically, I pushed broken form to its most extreme. Interestingly, the more the forms were broken down, larger patterns emerged. These patterns act as unifying forces and imply infinite order. What is underneath an image is usually pure geometric form that is unseen, yet felt.

Ink brush Paintings: Scrolls & Panels
Ink brush painting improved the gesture of my brush stroke. This is critical to the expressive nature of ink brush painting and Abstract Expressionism. Ink brush painting also put me in direct contact with Taoist philosophy and ancient Chinese painting traditions. The large rice paper panels called Categories of Line were created with traditional and nontraditional brushwork, although the abstract imagery follows the handling of space found in a traditional scroll.

I transformed the traditional scroll in to a modern one by creating a small scroll on cash register receipt paper. It is called One a Day. This scroll documents six months of daily paintings and poems. The Quicktime movie is posted here and on YouTube. It was made of one months worth of images and set to instrumental piano music.
Posted by Rebecca Moran at 10:21 PM No comments: 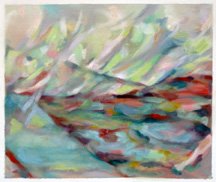 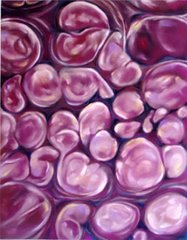 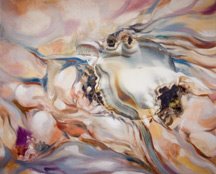 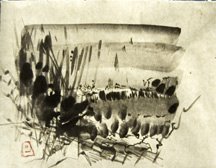